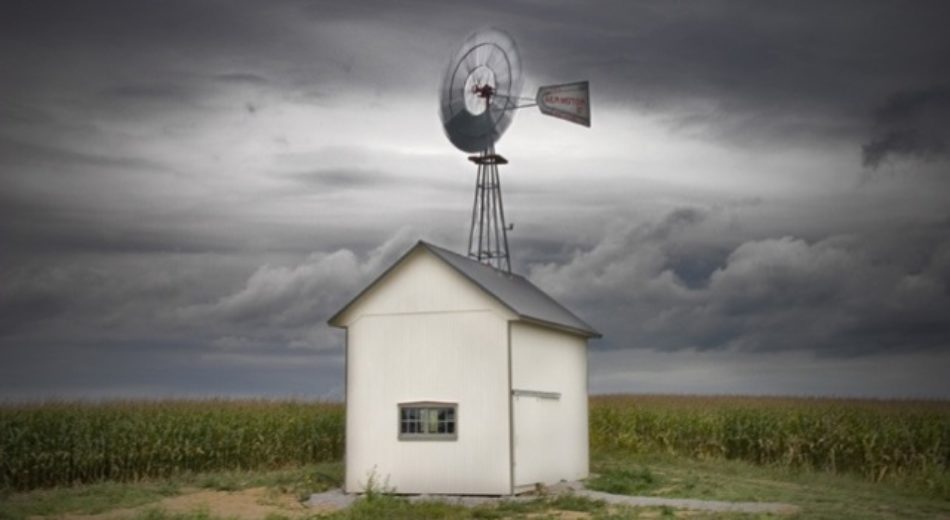 As early as I can recall the abandoned windmills left standing on local farms would catch my imagination. Like rusted steel sculptures they were icons of a lost era before the convenience of electricity and cheap oil. I enjoyed hearing the stories of my grandfather J. Mont McGinnis and the other old people who had worked with these machines when they were still in use. Of these machines the “power mill” was one that was often discussed but no examples had remained. This machine was almost always located on the top of a “milling house”, wagon shed or barn and in this area they were commonly mounted on a great wooden post that was held with guy wires. The old farmers referred to them as “grinding windmills”, as they turned a rotary shaft instead of the up and down stroke of the water pumping windmills. A small plate mill was at the bottom of the shaft with a pulley connected by bevel gears so some small machinery could be powered as well. The local preference seemed to be Aermotors built between 1888 and 1898 as they always had the large “bell” shaped hub.

He also recalled one such power mill falling on the farmers spring wagon a week after he had oiled it; he said “I knew it felt shaky when I oiled it”. Another time his grandfather had taken a trip to York and left him with his uncle to shell corn and instructions “not” to belt the sheller to the windmill, as the handle flying around could be dangerous. His uncle had a little to drink and they belted the sheller up enabling them to shell corn as fast as they could throw it into the sheller.

The power mill had a short time of existence, as the gas engine became the preferred source of farm power. The gas engines were mobile, would run regardless of the wind speed and you didn’t have to climb on shaky pole high in the air to maintain them! As far as I know most of the power mills disappeared before the 1920s and with two world wars with aggressive scrap drives the heavy machines became nearly extinct, my search only led to finding a few parts left in the back of barns and old grinding rooms. Rarely you may find an old wooden post above a farm building, occasionally still holding a shaft or rusted gearing.

In 1980 I found a power mill with a 16ft wheel, an 1888 version. This was much larger then the normal 12ft local mills. More recently I was able to locate and buy gearing for a 12 ft Aermotor, 1898 version. With these gears, the wheel parts and tail I found locally many years ago and some very good local Amish machinists we were able reconstruct a complete power mill. It sits atop a 30 ft steel tower over a reconstructed timber frame building. Attached below the shaft is an original grinder and pulley, the pulley is belted to a line shaft which will power a small stone mill as well as an ice cream maker! It is great to hear the clanking gears once again turn to the whims of the wind, it’s a sound that hasn’t been heard for many years and I don’t know anyone living that would remember hearing it before!