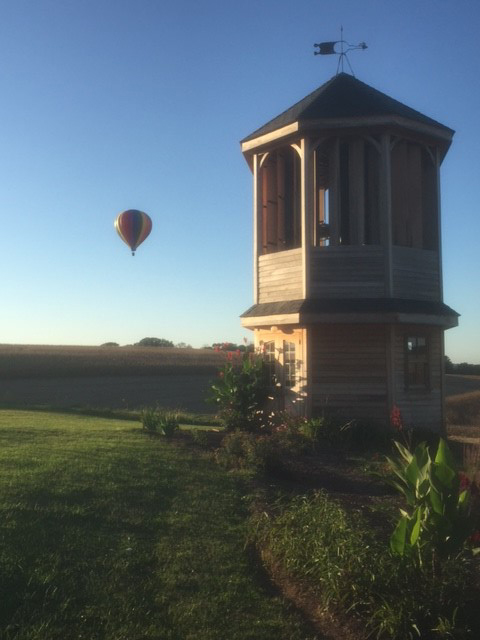 John Ebersol of Sunnyburn Pa. and assembled at the site with the help of David Esh’s crew from Conestoga builders. While we estimate that the rotor and shaft weigh 1000 lbs. it amazingly turns in the slightest bit of air. The rotor is 12 ft. in diameter and 8 ft. high. It took almost a year before we installed the shutters and system to operate them. During this time the rotor easily survived many storms and high winds. The placement of the movable shutters has almost double the speed of the rotor that is now about 25 rpms in a 20 mph wind.  The room under the rotor is finished in chestnut and is used as a small art gallery.

During the winter of 2015-2016 I was able to locate an 1895 Northern DC dynamo in Wisconsin from an early motor collector Stefan Osedene .  The wind turbines main vertical shaft has a large v-belt pulley attached at the bottom from which the belts twist to turn a horizontal line shaft. From this line shat a flat belt drives the dynamo. The electricity that is generated goes through an early volt and amp meter before traveling under ground to a nearby garage, there the line is attached to an all electric 48 volt lawn mower which serves as the battery storage. An inverter converts the 48 v to 110v for usable electricity in the summerhouse and garden. While the system runs smooth it demonstrates the inefficiency of the horizontal wind turbines and is only capable of making usable electricity in 20 mph plus winds, however it’s an enjoyable experience.